A few months ago we (K1, K2, and I) were introduced to these delectable treats by a coworker. They are so delicious they deserve photo placement on the blog (see below). 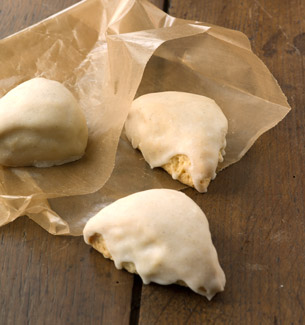 Since the introduction we have had the pleasure of consuming more of them on two more occasions (of course I keep count--they are THAT good). Since this could become an addiction and being the frugal person I am I figured I best find a recipe to duplicate the delicious little darlings. I bookmarked two recipes a couple months ago that seemed similar. One of the sites even mentions Starbucks and her want/need to duplicate the recipe (I am not that ambitious or comfortable in my baking ability). Then at the beginning of April the heavens opened up and angels started singing again (the first time is here). Ree has done it again. She also has delighted in the deliciousness that is Starbucks Petite Vanilla Bean Scones and then tasked herself with replicating their fabulousness. (Have I mentioned how much I adore her?)

Even with the addition of Ree's recipe I was in no hurry to make the scones; however, once I realized K2's departure was rapidly arriving I decided I should get them made. So, the Tuesday before her departure I was not working so I made some. For whatever reason (I have a few theories) my scones were NOT petite. They were delicious. Not quite the same but still fabulous. PE ate three or four that night (that isn't a common occurrence for non chocolate and peanut butter treats). I carefully placed some in a container to take some to work for K1, K2, and the coworker who introduced us to the delights. I placed the container on the counter where I would remember it. After I went to bed Moo so kindly was straightening up and moved the container. The next morning I went to work and remembered five minutes from work (I live 20ish minutes from work) that I forgot them. I was tempted to go get them but getting to work on time outweighed that temptation. They did make it to work on Thursday and everyone stated that they were delicious. I want to make them again with a couple preparation modifications. I will let you know if that changes things.

Preheat oven to 350. Split the vanilla beans down the middle lengthwise and scrape out all the vanilla “caviar” inside. Stir caviar into cream. Set aside for 15 minutes. Sift together flour, 2/3 cup sugar, baking powder, and salt. Cut cold butter into pats, then use a pastry cutter or two knives to cut the butter into the flour. Keep going until mixture resembles crumbs. Mix vanilla cream with egg, then combine with flour mixture; stir gently with a fork just until it comes together. Turn dough onto a floured surface and lightly press it together until it forms a rough rectangle. (Mixture will be pretty crumbly.) Use a rolling pin to roll into a rectangle about 1/2 inch to 3/4 inch thick. Use your hands to help with the forming if necessary.

Use a knife to trim into a symmetrical rectangle, then cut the rectangle into 12 symmetrical squares/rectangles. Next, cut each square/rectangle in half diagonally, to form two triangles. Transfer to a parchment or baking mat-lined cookie sheet and bake for 18 minutes, removing from the oven just before they start to turn golden. Allow to cool for 15 minutes on the cookie sheet, then transfer to a cooling rack to cool completely.

Vanilla Glaze
To make the icing, split one vanilla bean in half lengthwise and scrape out the caviar. Stir caviar into milk; allow to sit for awhile. Mix powdered sugar with the vanilla milk, adding more powdered sugar or milk if necessary to get the consistency the right thickness. Stir or whisk until completely smooth. One at a time, carefully dunk each cooled scone in the glaze, turning it over if necessary. Transfer to parchment paper or the cooling rack. Allow the glaze to set completely, about an hour. Scones will keep several days if glazed.