PE has six siblings. They have a rotation for exchanging family gifts for Christmas. This is nice because we know in advance who we will be giving a gift. This came in hand in June of last year, when a post appeared in my reader. Stephanie from Under the Table and Dreaming featured Amy from My 3 Monsters. In the post, Amy described how she made some Super Cool Wall Art. I knew right then that I wanted to make this wall art for PE's sister (technically for the family) for Christmas. 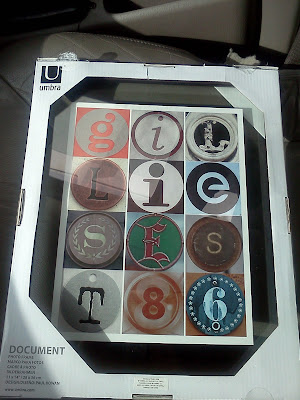 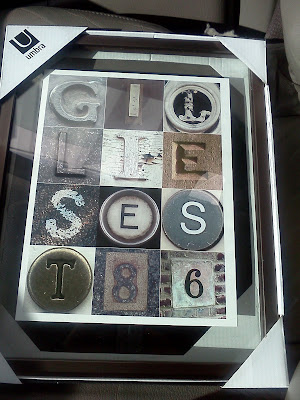 I used the links in the post to find the pictures I wanted to use. There were so many options I couldn't settle on just one so I made a bright version and a muted version. While I prefer using InDesign for document design, the computer I was using did not have it so I used Word. I was actually a little surprised that it went together as easily as it did. Word can be such a pain in the ass quirky sometimes so I was extremely pleased when the graphics fit together so nicely. I did have to do a bit of math to figure out how big the squares should be but other than that. . .easy, easy.

I will point out that her last name works out better than my last name due to length so you might have to play around with it a little by leaving off the EST, finding an "est" graphic (instead of the separate letters), or possibly using all four numbers for the year and not just the last two.

I put them in a document frame and delivered them in a timely manner. Last week is plenty timely. Especially when you take into consideration that his sister just delivered a present two YEARS late to another sibling. Three months really pales in comparison to that, right? Right.